Bluth Blogging: The Land Before Time 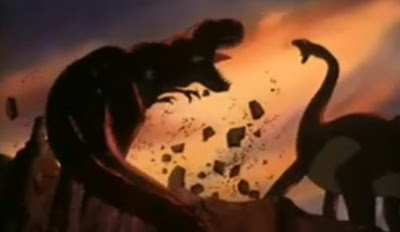 I have vivid memories of The Land Before Time scaring the shit out of me when I was six years old. The vicious Sharp Tooth (his flaring nostrils and hideous eye), the quakes that split the earth down its seams, the darkened sky, the deathly tar-pits, the just-plain-desolation of the dry, leafless landscape, the threat of starvation, the fragility of childhood friendship, and, finally, Littlefoot's aching loneliness. All scary, heady, and ultimately invigorating stuff when you're six years old.

It was easily the most foreboding animated film of my childhood, and growing up through the years I was beyond disgusted by the twelve insipidly happy-go-lucky musical sequels that followed it. I quickly discovered that Don Bluth had nothing to do with those films, of course, but I had to wonder: did the people responsible for those unholy twelve have any idea what made the original tick? Well, no, of course not.

What's surprising, though, is that the original's two producers, Spielberg and Lucas, might not have understood it, either. Deep cuts were made in both production and post (which helps to explain the film's abbreviated 65 minute run-time). The T-Rex attack scenes were truncated because they were too frightening; some sequences that put the young dinosaurs in peril were eliminated; screams that were too scary were changed to "more suitable" ones.

In fact, Spielberg and Lucas almost removed the death of Littlefoot's mother. This is the inciting incident, the death that not only starts the plot moving but out-and-out defines Littlefoot's character. Without the scene, there is no movie. Indeed, Littlefoot spends so much time mourning his mother that cutting both her death and his tears would probably leave about thirty or forty minutes of film.

It also makes the threat of Sharp Tooth toothless; he's scary because he kills Littlefoot's mother, not because he's a T-Rex (for, as any six year old would tell you, all dinosaurs, but especially a T-Rex, are not scary but "awesome"). The triumph of Littlefoot and company over their carnivorous foe is a triumph because Littlefoot is avenging the death of his mother. And we feel his pain not because she simply died, as Bambi's mother did, but because she died saving his life, rushing into battle with a foe over which she knew she could not win. She died because she loved him; in his mind and in many ways, that makes it his fault. His guilt and pain is palpable.

And though my twenty-seven year old self thinks that there are perhaps too many shots of Littlefoot with tears spilling out of his big ol' emo eyes, I still found the film to be frightening and his mother's martyrdom to be moving. And the fact that those aspects still work despite the best efforts of Spielberg and Lucas is a testament to both Bluth's artistic skill and tenacity.

There are parts that don't work as well for me; at a certain point, the moodiness and awe give way to a lot of annoying supporting character schtick, the sort of "zany" material that the creators of Rufio and Jar Jar no doubt wish there had been more of (and that the creators of The Land Before Time numbers two through thirteen made up for that perceived deficiency in droves). And yet those three comic relief characters (Petrie, Ducky, and Spike) are used pretty well in charting the dynamics of the group and the struggle between Littlefoot and Cera for leadership. The scene in which these three begin the night snuggled next to Cera but slowly migrate to Littlefoot, leaving Cera shivering and alone, until she, too, nudges her way into the pile effectively captures the insecurities and smug satisfactions of childhood.

Looking at the film now, I can feel the compromises Bluth had to make rather acutely; it doesn't have the same sense of flow, mastery, and answered ambition that The Secret of NIMH had. NIMH, in Bluth's own estimation, was the film where there was the least interference. While Spielberg might not have micro-managed as much when it came to An American Tail, the story was also the sort of harmless pap for children that Spielberg was interested in making. Trying to tell this particular story with those particular benefactors was perhaps doomed from the start.

Still, because the film doesn't quite "come together" as a whole, the film's ability to plug into the myriad and deep, unnamable fears of childhood has a smuggled-out, outsider-art sort of quality. And though it's no NIMH, neither is it any of its blasted sequels, nor Hook. Pyrrhic though it may be, I think Bluth was the victor in his battle with his producers.

It would, however, be his last until 1997's Anastasia. The five films he made in the interim were box office disappointments and received decidedly mixed (if not out-and-out terrible) reviews. The first of these, All Dogs Go To Heaven, is also the subject of the final (and most disappointing) installment of this series. See you then.
Posted by Tom Russell at 1:32 AM