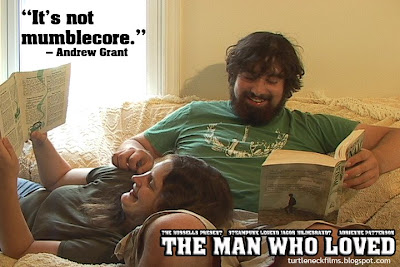 You can buy THE MAN WHO LOVED here.

Should be noted that its cousin, SON OF A SEAHORSE, is also available on DVD.
Posted by Tom Russell at 3:40 AM No comments:

Son of a Seahorse-- Now on DVD!

BUY IT NOW ON AMAZON!

Our film Son of a Seahorse is at long last available on DVD.

From an audacious opening scene that runs over 22 minutes (before the credits!) to an ending that is as quiet as it is disquieting, SON OF A SEAHORSE is an unusual (and unusually satisfying) comedy from the Russells. It's a very funny film about a very angry man. That conflicted and explosive man is played by David Schonscheck in a star-making performance that is contrasted and complimented by Adrienne Patterson's smart and stylish performance as his no-nonsense, sharp-edged wife.

The film features creature effects by Steampunk Legend Jake Hildebrandt, a supporting performance by filmmaker Joe Swanberg, and awesomeness, as always, by the Russells. It's DIY filmmaking at its boldest, brassiest, and funniest in a disc that's jam-packed with extras.

It's only $15 dollars-- a bargain, to be sure. We're not saying that you have to buy it-- we're just saying if you don't we might not be friends anymore. BUY IT NOW ON AMAZON!
Posted by Tom Russell at 8:24 PM No comments:

LIFE INC. How the World Became a Corporation and How to Take It Back

"In Life Inc., award-winning writer, documentary filmmaker, and scholar Douglas Rushkoff traces how corporations went from a convenient legal fiction to the dominant fact of contemporary life. Indeed as Rushkoff shows, most Americans have so willingly adopted the values of corporations that they,re no longer even aware of it."

Take a look at the 9 minute "Life Inc The Movie". For more information about "LIFE INC. How The World Became A Corporation And How To Take It Back" and it's author, Douglas Rushkoff, check out http://www.lifeincorporated.net.

Today Second Party Games, the home for Tom's freeware games, went live, with a handy-dandy video chronicling the development of Side Saddle 2.

Because this site is more film-oriented, there won't be much by way of cross-posting between the two. So, bookmark it.
Posted by Tom Russell at 10:22 PM No comments:

Three films and a game this time around. Please, please, please, please! don't hesitate to recommend indie films and/or games. The entire point of this is to raise the profile of films and filmmakers that haven't gotten a fair shake-- but since doing random searches for "indie trailer" usually only results in the usual festival favourites and Indywood fare, this isn't something I can do alone. If you're a filmmaker/game designer who needs some more attention, please send me an e-mail at milos_parker at yahoo dot com. Don't worry about being shameless about it-- I know that I'm not.

The trailer, the teaser, the preview. It's a bastard form, one that seeks to sum up a feature film-- an entire work of art-- in the space of thirty, sixty, maybe ninety seconds. To give an impression of the film, to induce a curiosity about it and a desire to see it, without misrepresenting it or giving away the good parts. It's almost an impossible task.

And I'm not sure how much this creature of commerce has to do with good box office-- I think everyone who was thinking of seeing Transformers 2 made up their minds long before the trailers. Months before the trailers hit the theaters, we've seen exclusive screen-shots and read "summer movie buzz" galore. Despite the fact that the commercials and trailers for Paul Blart: Mall Cop looked just as awful as the movie, everyone went to see it; nobody went to see Watchmen despite the massive advertising/marketing campaign.

So, as far as the blockbuster cinema goes, I don't think the trailer makes or breaks the deal. With (actual) independent films, I think it's a bit trickier. On the one hand, because they don't have those sort of mass-marketing campaigns that blockbuster and indywood films possess, and thus they don't have that same wide exposure. A trailer can be the thing that makes you want to see the film.

But, conversely and perversely, because they don't have that wide exposure, and because their trailers are unlikely to play in the cineplexes, the chances of you running across their trailer by chance is next to nil. There are so many independent film trailers that sit on their creators' websites and on video-sharing sites, unwatched and unloved, steadfastly refusing to go viral. Not to mention sidebar links to actually buy their films that go unclicked.

I don't have a solution to this problem, but I would like to give those indie trailers a little bit of love. And so, here's the first installment of Indie Trailers A-Go-Go, a (hopefully) continuing series here at Turtleneck Films. Feel free to e-mail me with any suggestions, especially if you're an independent filmmaker who feels they haven't got enough exposure.


Remember, if you'd like your trailer featured in this space in the future, please don't be shy.
Posted by Tom Russell at 11:37 PM No comments:

So, from time to time, Tom does some fiction writing over at the USENET newsgroup rec.arts.comics.creative. It is here, for example, that the rough draft of Jolt City was first unleashed upon the world, as well as six or Seven Romances. He's also won a fair number of awards for said fiction-- not that he's bragging or anything.

And while he's been concentrating more on filmmaking than fiction, he still feels the need to give something back to the community that's given him so much. And it was in that spirit that he created the first of hopefully many "High Concept" contests, which has just come to a close.

A rough sketch of a character idea-- the high concept in question-- is provided to the group as a whole and anyone who wants to participate writes a story delivering on that character concept. The winner, by popular vote, will provide the concept for the next contest, and so on.

Since I started the first contest, I provided the first concept: the Forgotten Man, a Depression-era pulp hero/superhero/vigilante. The basic idea behind the concept is that, once every twenty-four hours, every person on earth forgets everything they know about him.

Six authors answered the challenge, and you're free to read their stories over at RACC. You're also free to vote for your favourite between now and July 18, 2009. Make your voice heard here.
Posted by Tom Russell at 11:56 AM No comments:

An Actual Conversation I Overheard At the Post Office

Long line. Behind me, a boy and his mother.

BOY: When you were little, my dad was bigger than you.

BOY: When you were little, I was the grown-up and I made you sit in the corner.

turtlebit: The web it is a-changin'

In 1997, when I first plugged into the web, if anyone had suggested developing a website where anyone could mosey on in and change it around as they saw fit, free of charge, he or she, or me, would have been laughed at. In 1997, if a page loaded in less than five minutes we were ecstatic. We happily set up our websites on "buggy" sites such as Tripod, Geocities, and Angelfire. If we wanted information, we bought subscriptions to sites. We participated in or lurked on USENET and bulletin boards. We watched movies and television shows on that box, you remember, the one usually located in the living room, with the picture tube that wasn't much different from the 1960's version.

As the new millennia has progressed, we have seen social software, such as blogs and wikis, bring about a new era of collaboration and access to information. Wikipedia gives us access to a continuously updated world of information. Blogs are so incredibly easy to set up and customize that we'll often use one to get a website online ASAP, or in lieu of a "real" website altogether. According to Tim O'Reilly, of O'Reilly, "the 'blogosphere' can be thought of as a new, peer-to-peer equivalent to Usenet and bulletin-boards" of yesteryear.

Blogosphere? Really? Not so long ago it was the internet or the world wide web, web for short. We were happy with our simple forays into the 'ethernet', um, internet.

Then comes YouTube. Facebook. Twitter. Suddenly we can participate, yes!, participate!, on a larger and more creative scale. Make a short movie or serialize a long one, become a taking head and vlog your head off, catch a crime as it happens, show your kitty flushing a toilet over and over and over again...you're on YouTube. Connect with old friends and classmates, share a photo album and constantly update us on your latest activities and shenanigans...you're on Facebook.

Now we have Twitter. Tim O'Reilly says that "the blogosphere is the equivalent of constant mental chatter in the forebrain, the voice we hear in all of our heads". He said this several years before Twitter, which for my money, fits easily into this description. But it's not just inconsequential chatter; the recent and ongoing freedom demonstrations in Iran have put Twitter in the central role of information disseminator and organizational tool. Whoa. It's not just an oddity or a quirk but a necessity. We can converse with anyone anywhere about anything – for free.

The times they are a-changing. Continuously so. In 2017 who knows what the internet will look like, how we will be interacting with it, and how on earth we got by before it.
Posted by M.L. Russell at 12:11 PM No comments:

Over the last couple weeks, a lot of people have tried to contact us for one reason or another, whether via twitter, youtube, various comments threads, what-have-you-- things we don't necessarily pay a whole lot of attention to. So, to make things a little easier, here's Tom's e-mail address:

While we're on the subject of returning e-mails, let me throw a proposed bit of netiquette out there: if an actual person (and not a robot) has taken the time to compose a letter and send it to you electronically, you owe them at least the courtesy of a response. That doesn't mean you have to become pen pals with someone, that doesn't mean you have to take time out of your busy schedule to compose voluminous paragraphs. But you can at least say, hey, I got your e-mail, I acknowledge that you exist, and I appreciate the fact that you took the time to write me.

I promise I will at least do that; we're not going to ignore anybody. If you haven't gotten a response back from us within a week, that means we didn't get the e-mail; feel free to send it again.
Posted by Tom Russell at 6:05 PM No comments: