Murdering is funnier than killing.

A good low-budget director is above all able to adapt (and aptly) to whichever circumstances should arise. For example: in The Man Who Loved, there was a scene that featured pretty much every member of the cast, and it took us a lot of hoop-jumping to find a day that worked for everyone. And so imagine our dismay when almost everyone showed up-- that is, everyone but one, who was to be something of a major focus in the scene. There was no way we could reschedule the scene, and so we redistributed her dialogue to other characters and lamp-shaded her absence. And doing so actually helped us focus on what the scene was actually about.

Similarly, we're more than happy to rewrite lines for an actor, to make it flow more naturally for them, to let them put their own spin (and thus their own selves) into it. At the same time, our writing aims to be flavourful and precise, and thus somewhat immutable: you might be able to preserve the meaning of the words and the underlying emotion, but changing the words changes the feel of the words, the rhythm, the timbre, and-- when writing comedy-- the funny.

There's a line in Olivia Forever!! in which Olivia refers to her Halloween costume from "the two years previous"; Adrienne often flipped the word order to "the two previous years". Now, both versions mean the same thing, but "the two years previous" has a slightly dry or academic feel that communicates something about the character and her personal style. "The two previous years" communicates nothing but the facts; all the flavour is lost. And, this being a film about the hazards of idiosyncrasy, and Olivia being a character who derives a great deal of pleasure from verbiage, it was important that we preserve that flavour, and so this was one case in which we couldn't let it be rephrased. The punchline to all this? We ended up cutting the entire scene-- including the line-- anyway.

Not that, again, our scripts are considered holy and untouchable. We're constantly cutting and revising, looking for ways to punch it up, to be more precise, more flavourful. Recently, we were going over the following dialogue in rehearsal:

RODNEY: And you weren't planning on killing me?
OLIVIA: It hadn't occurred to me.
RODNEY (mishearing): It had?
OLIVIA (louder, clearer): Hadn't.

And it occurred to us that the word "killing" got the meaning across, but didn't have much flavour.

"Let's change that to murdering," we said: "'murdering' is a funnier word than 'killing'."

We crossed it out and they read it over again: it did, indeed, seem funnier. The word was more precise, communicating more of a sense of deliberate violence, which will hopefully stand in stronger and more comedic contrast to the polite, friendly tenor of the conversation. And it's a more flavourful word: "killing" starts strong but quickly becomes a slippery mush of l-sounds that mumble their way into "ing"; "murdering", by contrast, consists of three distinct syllables, the first two of which rhyme and are expelled forcefully outward: nothing soft, lilting, or indistinct about it.

It is, in our estimating, just the right word.
Posted by Tom Russell at 9:07 PM No comments:

The Best Sentence Ever.

John Adams finished off his inaugural address with a truly epic sentence. It can be summed up as "If all these things are qualifications for the job, then I'll be President and I'll do my best." But, as in most things, summing it up takes the beauty out of it. Take your time, don't skim, and enjoy the ride:

"On this subject it might become me better to be silent or to speak with diffidence; but as something may be expected, the occasion, I hope, will be admitted as an apology if I venture to say that if a preference, upon principle, of a free republican government, formed upon long and serious reflection, after a diligent and impartial inquiry after truth; if an attachment to the Constitution of the United States, and a conscientious determination to support it until it shall be altered by the judgments and wishes of the people, expressed in the mode prescribed in it; if a respectful attention to the constitutions of the individual States and a constant caution and delicacy toward the State governments; if an equal and impartial regard to the rights, interest, honor, and happiness of all the States in the Union, without preference or regard to a northern or southern, an eastern or western, position, their various political opinions on unessential points or their personal attachments; if a love of virtuous men of all parties and denominations; if a love of science and letters and a wish to patronize every rational effort to encourage schools, colleges, universities, academies, and every institution for propagating knowledge, virtue, and religion among all classes of the people, not only for their benign influence on the happiness of life in all its stages and classes, and of society in all its forms, but as the only means of preserving our Constitution from its natural enemies, the spirit of sophistry, the spirit of party, the spirit of intrigue, the profligacy of corruption, and the pestilence of foreign influence, which is the angel of destruction to elective governments; if a love of equal laws, of justice, and humanity in the interior administration; if an inclination to improve agriculture, commerce, and manufacturers for necessity, convenience, and defense; if a spirit of equity and humanity toward the aboriginal nations of America, and a disposition to meliorate their condition by inclining them to be more friendly to us, and our citizens to be more friendly to them; if an inflexible determination to maintain peace and inviolable faith with all nations, and that system of neutrality and impartiality among the belligerent powers of Europe which has been adopted by this Government and so solemnly sanctioned by both Houses of Congress and applauded by the legislatures of the States and the public opinion, until it shall be otherwise ordained by Congress; if a personal esteem for the French nation, formed in a residence of seven years chiefly among them, and a sincere desire to preserve the friendship which has been so much for the honor and interest of both nations; if, while the conscious honor and integrity of the people of America and the internal sentiment of their own power and energies must be preserved, an earnest endeavor to investigate every just cause and remove every colorable pretense of complaint; if an intention to pursue by amicable negotiation a reparation for the injuries that have been committed on the commerce of our fellow-citizens by whatever nation, and if success can not be obtained, to lay the facts before the Legislature, that they may consider what further measures the honor and interest of the Government and its constituents demand; if a resolution to do justice as far as may depend upon me, at all times and to all nations, and maintain peace, friendship, and benevolence with all the world; if an unshaken confidence in the honor, spirit, and resources of the American people, on which I have so often hazarded my all and never been deceived; if elevated ideas of the high destinies of this country and of my own duties toward it, founded on a knowledge of the moral principles and intellectual improvements of the people deeply engraven on my mind in early life, and not obscured but exalted by experience and age; and, with humble reverence, I feel it to be my duty to add, if a veneration for the religion of a people who profess and call themselves Christians, and a fixed resolution to consider a decent respect for Christianity among the best recommendations for the public service, can enable me in any degree to comply with your wishes, it shall be my strenuous endeavor that this sagacious injunction of the two Houses shall not be without effect."
Posted by Tom Russell at 3:14 AM 1 comment: 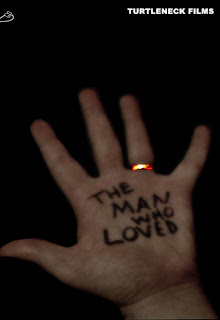 There's something wrong with Sarah. Something inside her that she doesn't quite understand. Her husband, George, hopes it'll just go away on its own. But his passivity only seems to make things worse.

A tense yet delicate portrait of a marriage in crisis, The Man Who Loved is directed by wife-and-husband filmmakers Mary and Tom Russell with verve, humour, honesty, and an eye for everyday beauty.

SPECIAL FEATURES:
+ Directors' commentary.
+ Trailers for future Turtleneck releases Son of a Seahorse (# 2) and Olivia Forever!!
+ Cinema du Kitteh: a collection of three 2006 shorts (Cat Singles, Cat-astrophe, and The Invaders From Above) created by the Russells and starring the feline thespians of The Man Who Loved.

You can purchase this film either through CreateSpace or Amazon. The cost to you is the same either way, $15, but CreateSpace gives us a significantly larger royalty-- $7.80 per disc, as opposed to Amazon's $3.30.
Posted by Tom Russell at 1:46 PM No comments: