Kentucker Audley's Open Five-- which I wrote about briefly, along with Audley's breezy, delightful Team Picture and prickly, challenging Holy Land, here-- will be available online for free and for a limited time over at his website starting October 21. Like all his features, it's slender and poetic and hard-to-put-into-words and worth your time.
Posted by Tom Russell at 1:53 PM No comments: 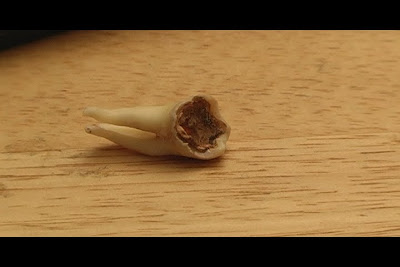 I've always had bad teeth. I had juvenile periodontitis growing up, and as an adult my teeth have become so sensitive to cold and sweets that I simply can't have ice cream, fudge, or chocolate; I prefer to drink soda beverages and water at room temperature, because otherwise it hurts like the second coming of bejesus. For better or worse, I'm used to my mouth being in some kind of pain or discomfort, and I've changed my lifestyle to minimize that pain as much as possible.

That's why I didn't think much of the occasional pain in my right wisdom tooth. Most of it had rotted away a year or two ago. I was careful not to use it when masticating, and I grinned and bared through whatever pain it gave me.

In May of this year, it started acting up more than usual-- a constant pain that inflamed the gums surrounding it. At the same time, I developed a mind-splitting ear ache. It turned out that the two things weren't unrelated; the abscess in the tooth had become infected, and it had spread to my ear. The next day, it spread to my entire lower jaw. I was quickly put on medication, which quelled the pain and eliminated the infection.

The days that followed were pretty agonizing. The physical pain was immense, and I can neither adequately describe it nor overemphasize this point: it was the most pain I've ever been in in my life, and I never want to feel that kind of pain again, ever. Beyond that, however, the infection robbed me of "me".

I'm a talker, but it hurt too much to open my mouth to talk. I love to eat-- possibly the sense I derive the most pleasure from is taste-- but I couldn't do more than slurp apple sauce. And even that hurt so much and tasted so terrible-- the infection not only preventing me from chewing, but from tasting food properly-- that I couldn't stomach more than a few bites. Which meant that I went several days with hardly any food. I was weak and exhausted, unable to stand on my own. I just spent all that time lying on the couch in my pajamas, and while I'm not the most physically active sort, the lack of mobility really ground me down. The pain was so distracting that I couldn't read any books, watch any movies, or play any video games.

And all this made me rather cranky, ill-tempered, and difficult to deal with. So, like I said: it robbed me of my "me"-ness, prevented me from adhering to the behaviours, pleasures, and attitudes that collectively spell out "Tom". Pain, as one of the Mantle brothers so memorably put it, causes character distortion, and I was glad when I came out the other side of it. According to my dentist and my GP, if I had waited a few more days before seeing the doctor-- not that I'd have been able to handle the pain for that long, so that's a big "if"-- it would have spread to my heart. It would have killed me.

Which is a sobering thought. I've always been intensely, perhaps morbidly, definitely neurotically, concerned with the decay of my own flesh and my impending demise. It's something I contemplate daily, much to my Mary's chagrin. My father died at the age of thirty-eight, and somehow that's been built up in my brain as a number of Significance-- ingrained somehow is the feeling that I won't live to be older than thirty-eight. A big part of the reason why I'm so prolifically creative-- making movies with Mary, designing video and board games by myself, writing novels and stories, composing music, even running for political office in a weird way-- is because I frantically wanted to make what time I feel I have left count. It's not quite the same as wanting to become immortal through art; it's more that I want to do as much as I can and leave something behind. And since it's unlikely that we'll ever have children, art is about the only thing I have left to leave.

That's not to say I'm going to stop creating-- creating is one of those ways that I just plain enjoy myself-- or that I'm less prone to mood swings, suicidal depression, self-loathing, and moments of sudden unexplainable terror (yep, all that fun stuff is still present and accounted for). I'm still very much Tom, for better or worse, but my slight brush with death makes me want to be a happier Tom than I've been in the past. And I think I am, if only a little bit.
Posted by Tom Russell at 11:19 PM No comments: