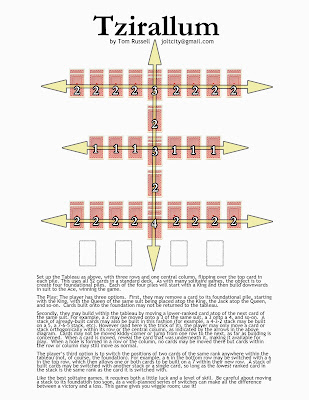 Some of you probably are aware by now that, while we're still working on films (and long-overdue DVDs of films), Tom has embraced a new vocation: board game design. This morning, I had a dream about a solitaire card game and when I woke, I recreated it. Like many ideas one gets in a dream, it wasn't very good or compelling. But it made me think of another idea, and that idea, in turn, became Tzirallum. Let me know how/if you enjoy it.

Be sure to heed the last bit of advice at the bottom of the instructions, especially with the low-numbered cards. It really does make a lot of difference. Also, don't be too hasty about eliminating the "pivot" spots in the tableau that, by a few tricky switches and builds, might move an otherwise stranded card from one row to another by way of the column.
Posted by Tom Russell at 5:12 PM No comments: