Bluth Blogging: The Secret of NIMH 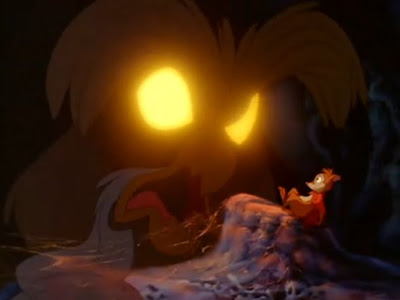 I have fond but ever-so-vague memories of the four films Don Bluth directed in the 1980s-- The Secret of NIMH, An American Tail, The Land Before Time, and All Dogs Go to Heaven. These four films, the last three of which I saw in the theater at ages four, six, and seven, respectively-- The Secret of NIMH having come out a week after I did, I first encountered it on a television set-- formed what probably seemed like an unstoppable chain of hits that came undone with 1991's Rock-a-Doodle. I haven't seen any of these films since at least the early nineties-- or, rather, I hadn't seen them again... until now.

In general, I remember the films being darker than other animated films, and by darker I don't necessarily mean "scary", though The Land Before Time did frighten the bejeebus out of the six-year-old who saw it, but that they weren't dominated by bright, goofy colours. They seemed in a surreal way to be more "realistic" and less reassuring. I left those movies feeling certain that the things on the screen could happen; I felt no such verisimilitude when I waddled (pigeon-toed and unsatisfied) out of Oliver and Company. The Bluth films felt more like "real" films, the sorts of films that adults watched, and being that I was a strangely solemn little boy that desperately wanted to be taken very seriously indeed, that aspect appealed to me. I liked that there was something at stake. I never worried about the characters or the outcome in the Disney films of the period.

Bluth himself was unhappy with the mollycoddling, banal nature of those late-period pre-"Renaissance" Disney films, which is why he left the House of Mouse in the first place. Before their resignation, Bluth had spearheaded several attempts to change the direction of a company that saw its films as products to exploit, made as cheaply and as quickly (and as safely) as possible. It was that old court case, Art v. Commerce, all over again. When Bluth left, taking nearly twenty percent of Disney's animators with him, a staff meeting was held that reportedly began with the words, "Now that the cancer has been removed..."

The first feature Bluth and his fellow expatriates made was about as far from safe as possible. At its heart, The Secret of NIMH is about a widow fighting desperately to save the life of her sick child. So sick, he cannot be moved, for the chill might kill him. But moving day is near; the farmer's tractor will surely crush the home and the sick child that lays within it. Those are the stakes, my friends: a meek and frightened mother-mouse moving heaven and earth to save her son.

Mortality is central to the film and is emphasized by a series of frightening set pieces, chief among them being the sequence in which Mrs. Brisby seeks the council of the Great Owl. This is a potentially dangerous individual for a mouse to seek out; her not-entirely unfounded fears of being devoured are underscored by the hostile landscape surrounding the owl's tree. 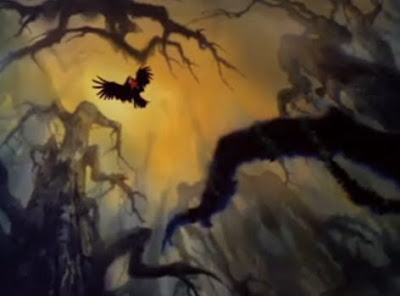 Even more daunting, however, is the prospect of entering the Great Owl's tree. Shadows stretch out from its gaping maw, cobwebs hanging like curtains. Note the dynamic contrast between the shadows and the violent orange of the sky; if it had been a dark-blue starry night sky behind Mrs. Brisby and Jeremy, it wouldn't work, the contrast wouldn't be as striking. 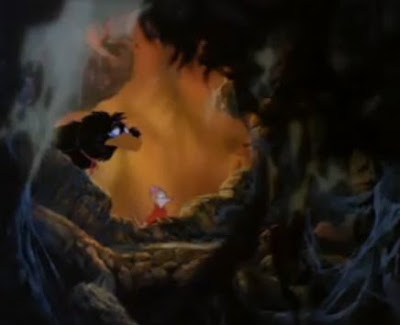 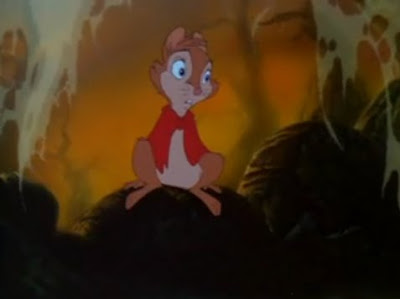 "Film is flow," I'm inordinately fond of saying. Too many films, and animated films especially, are too quick to cut to the chase, to the action, to the sensation; as such, there's no sense of flow (I'm looking squarely at you, Transformers: The Movie). Bluth understands flow and pacing; he's unafraid to luxuriate in this murky atmosphere, to follow Mrs. Brisby as she makes her way through the cobwebbed darkness. 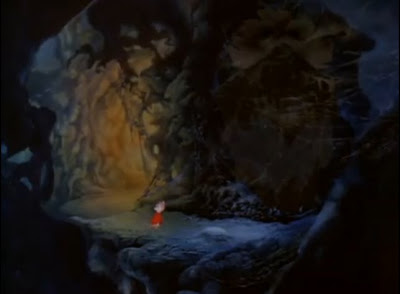 When a shock is required, such as the discovery of this pile of tiny corpses-- 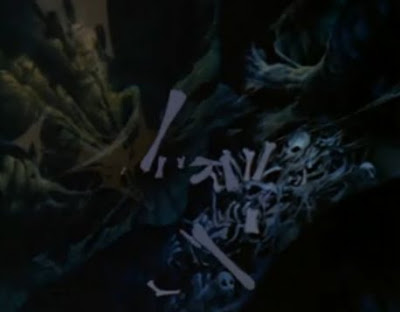 -- it emphasizes her vulnerability, her potential as prey, and thus her fears. It's not coming at the expense of the atmosphere, or even paying it off; it's part of the atmosphere, of the tapestry, of the flow. The same can be said for the sequence of shots that follow, which introduce a predatory spider that sneaks up on Mrs. Brisby, glaring at her with its alien red eyes and drooling from its hairy, pincered mouth. 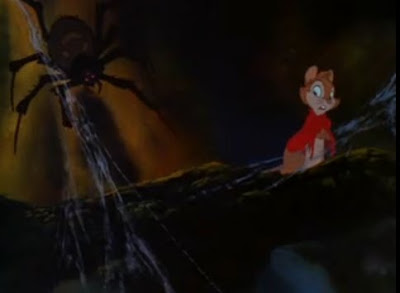 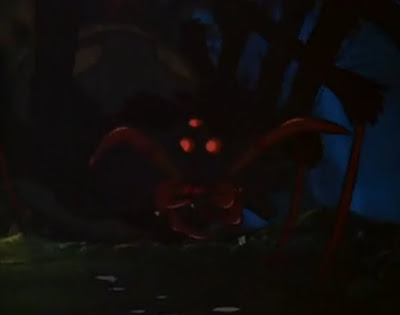 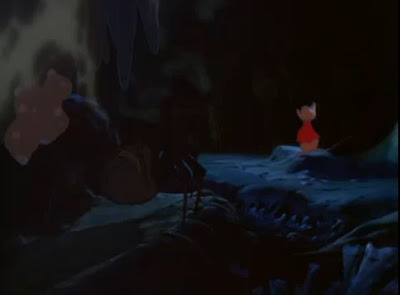 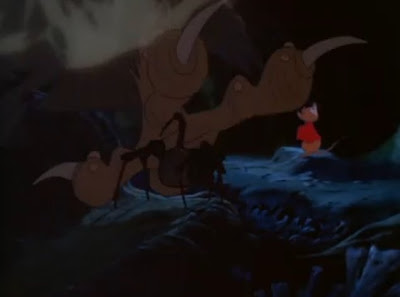 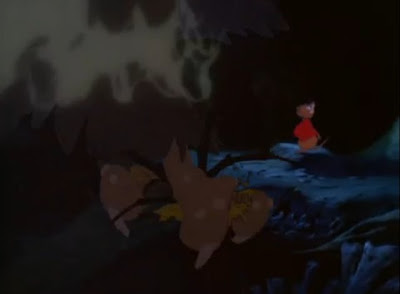 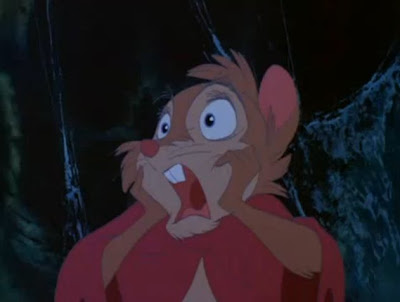 Again, this isn't just a cheap shock, but a deeper and more frightening one. That thing was going to eat Mrs. Brisby, and it just died, it was just squished, all yellow ooze and twitching legs. If that spider is vulnerable, how much more vulnerable is the mouse it was about to eat? How much more vulnerable is the tiny mouse who lies in the bed, threatened both by pneumonia and the farmer's tractor, two forces over which poor Mrs. Brisby seemingly has no power?

Each frightening set piece emphasizes Brisby's mortality/physical vulnerability, often in visual/tactile ways: for example, she's basically stripped naked before she attempts to drug the monstrous cat, Dragon; trying to escape from a cage, she cuts her arm and bleeds. And by emphasizing that mortality, Bluth and company emphasize her son's mortality, and thus her fear, her motivation, her love. If she fails, he dies.

This all comes to a head in the film's finale. As the rats of NIMH move Mrs. Brisby's home intact to a safe place, her four children, including sick Timmy, sequestered within, the ropes are cut by the dastardly Jenner, intent on squashing Nicodemus, the only obstacle to his lust for power. And, sickeningly, the plan carries off with a hitch; Nicodemus is squashed by the house, the effort to move it is thwarted. The bad guys won.

There of course follows a dynamic sword fight, the most exciting animated action sequence since Prince Phillip took on "all the powers of Hell" in Sleeping Beauty, and the badniks are punished. But Nicodemus stays dead: death is final and no one is safe. And so when the house starts to sink in the mud, and when, despite all their best efforts, Mrs. Brisby and the rats cannot stop it from doing so, there is the very real chance that her children will drown, a possibility that is ominously underscored when the home is submerged completely in the mud, and the rats pull the frantic Mrs. Brisby away from it, restraining her. 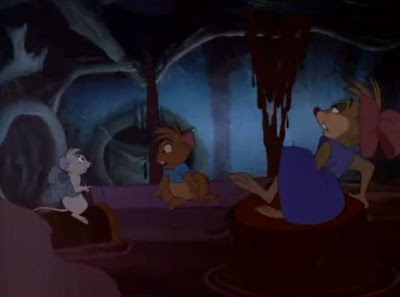 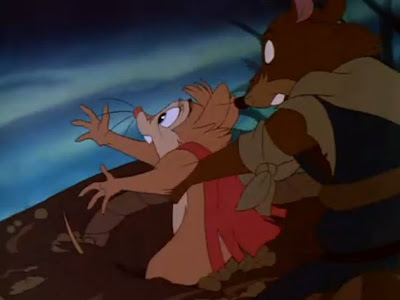 It's a moment of real terror, and even the somewhat hallucinogenic ending, in which Mrs. Brisby uses the magic amulet to telekinetically raise the house out of the mud, does not mitigate its power. I wouldn't call it a deus ex machina, because a deus ex machina by definition does not flow from within the story but is rather imposed on it. Because the whole film is about her fear, her feelings of powerlessness, and her love for the child, it makes perfect sense for that love to prevail in the end, in the moment when she is the most fearful, the moment where she seems to be the most powerless.
Posted by Tom Russell at 3:10 AM

potingan really good contents of your site ,, I really like

This blog is so nice to me. I will continue to come here again and again. Visit my link as well. Good luck
http://www.apotikobatcytotec.com ( Obat Aborsi )
http://www.doktersahabat.com ( Cara Menggugurkan Kandungan )

Thanks for your marvelous posting! It is very useful and good. Come on. I want to introduce an get app installs, I try it and I feel it is so good to rank app to top in app store search results, have you ever heard it?