My Name On A Box. 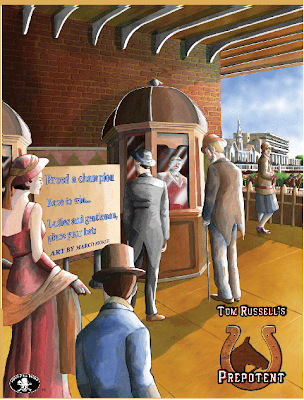 I'm proud to announce that my board game Prepotent is an anticipated Winter 2011 release from Numbskull Games.

I wouldn't say I was bad at any of those things-- I was quite good at some of them-- but I was never successful at them, financially, critically, what-have-you. And I felt that, and my own limitations, acutely; I enjoyed making films, writing fiction, being generally weird, but it never got my anywhere, and I was always searching for That Something, that one thing that I was good at. I never felt like Tom Russell, Filmmaker or Tom Russell, Novelist; I was always Tom Russell, Wearer Of Many Hats, None Of Which Especially Suit His Unusual Head-Shape.

Until last year, when I discovered board games, almost by accident, and I discovered-- while recovering from an infection that nearly killed me-- that I have something of a knack for them. I discovered that I was Tom Russell, Board Game Designer, and threw myself into it with abandon.

At first, it seemed like it would be more of the same: publisher-after-publisher, game-after-game, it was "No." And I got some of the same naysaying that had dogged me whenever I announced a new creative endeavor, amplified by a general ignorance of how board games have changed in the years since, say, Monopoly. I must admit, I was starting to get discouraged.

But the funny thing is, no matter how many "No's" you stack up over a life time, all it really takes is one "Yes" to wipe 'em out. Mr. Stevens, the publisher of Numbskull, said "Yes."

Like I said up top, it's a weird feeling. I still don't quite know how to process it, other to occasionally jump up and down in giddy laughter. I'm sure that sensation will quiet down eventually, and that I'll stop annoying my friends by marveling at my reversal of fortune. What won't go away, though, is the feeling that at long last, after decades of searching, I know who I am.
Posted by Tom Russell at 6:59 PM